The month of May in New York; that means time for design week and the ICFF Show – the International Contemporary Furniture Fair.  I have been many times over the past years but skipped a few recent ones, so it was time to go back.  My focus this year was to work with a New York client in midtown, then spend the rest of the weekend looking at lighting and furniture for various projects.

The first day in NY it was sunny and beautiful.  I was indoors most of the day in meetings but walking around a corner on the way to my hotel – yes, an old, familiar sight:

The sun was catching the Empire State Building in such a way to make it sparkle, something I never noticed before.  It always seemed so heavy, so concrete.  Nice to see something familiar in a different way.

Incidentally, I was not the only “tourist” taking this picture at this point.  So that made me feel good about stopping, pulling out my little Canon S100 and setting up the shot.

The ICFF show is based at the Javits Center, west of midtown.  It is seemingly out of the way but a short walk from the A C and E (blue) subway and Penn Station actually makes it really convenient.  I was setup at a nice little hotel with a client of mine and all set to explore the show and all the “outside events”, showroom openings, parties and happenings.

Once at the show it was hard to miss any lighting innovations – great stuff was seen in every aisle.  What is nice about the show is how local and small international makers/brands attend the show, so you discover unusual and one-off pieces as well as major brands.  Here are some highlights of lighting: 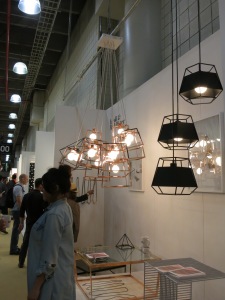 From top left, Rough and Smooth pendants by Tom Dixon, Iacoli & McAllister pendants to the top right, and some very nice clear globe chandeliers by Pelle to the right.  Different arrays of glass and paper shades in carefully-draped arrangements were a strong trend throughout the show.

Below to the right is Mooii, which always looks good.  There were larger brands present, with companies such as Tango showing some very nice new concepts including some outdoor.

A company called Graypants had some paper/cardboard/something pendants which were nicely crafted.

There were also some concepts with shades made from rapid prototyping, such as lacy SLS shades in “natural” white.  Open-ness and interesting screen materials were dominant.

There was a “maker faire” feel to the show as well, with an area set up for rapid prototyping and other sorts of fabrication including a seminar area to learn about maker technology.  There were at least two 3D printer companies on display and there was also a company called US Trumpf who rolled out enormous laser-cutting machines and some fabrication jigs, making Tom Dixon “death star” lighting pendants right there on the show floor.  It was pretty cool to see the process, as it was ultra-clean and quiet without the heavy presses, greasy flooring and general mess of a typical factory floor.  Here is a pic of the “death star”:

I really like this fixture.  Dodecahedron?  I didn’t count sides.  Anyway, it is make by laser-cutting aluminum sheet, including all the holes.  I don’t know how much waste you get from making the holes, as the material is burning off during the cutting process.  Anyway, other than some muted humming coming from the giant stand-alone laser cutting machine, the only noise on the makeshift factory floor was the sound of simulated mirror-folding/film advance of peoples iPhones as they took pictures of the manufacturing process.

And a closeup of the assembly table shows the men riveting the Death Star together.

There was a small stand set up with some fine hanging fixtures called Shakuff.  The owner was not around but I looked closely at the artisan glass shades – very nice work.

I’m not sure how the red box shades were made.  This next piece was comprised of hanging sheets of wavy glass, in a box shape (in plan) which made them seem like towers of wavy glass.  A very cool effect.

Next up I passed Roll and Hill.  I love what this company is putting out, and this particular hanging pendant kept catching my eye all weekend (I saw it around town and on various show reports over the weekend) – it is called Bluff City by designer Jonah Takagi.  Splendid.

Next is a company called R B W which I figured out later stands for Rich Brilliant Winning.  I’m thinking with that name they are anglophiles.  Anyway, I just took some detail pics of their products, as they were particularly well-crafted.  Here is a shot of their Branch Triple Chandelier from their website:

Here are some details of their floor lamps and such:

A continuing trend is to use wire to make open-looking shades.  Some fixtures in this vein by makers Phese and Blu Dot, respectably. 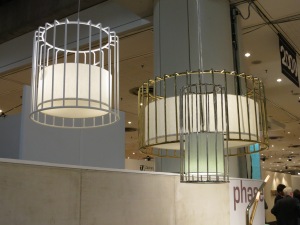 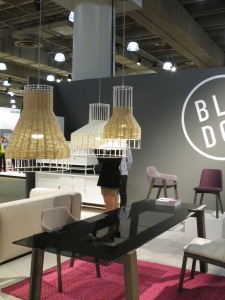 A company called Gabriel and Scott had some nice folded-metal fixtures.  I didn’t get much detail about them or this piece but it was decidedly on-trend:

Something unrelated to lighting; this is Amuneal’s exhibit, which won the Best of Show award.  It was truly stunning.  The exterior was made with rather thick gauge metal and formed an undulated surface.  The interior had a “cabinet of curiosity” theme, with vitrines and display cases all (seemingly) designed for this show.

There was a very high level of craftsmanship and composition on view at Amuneal. 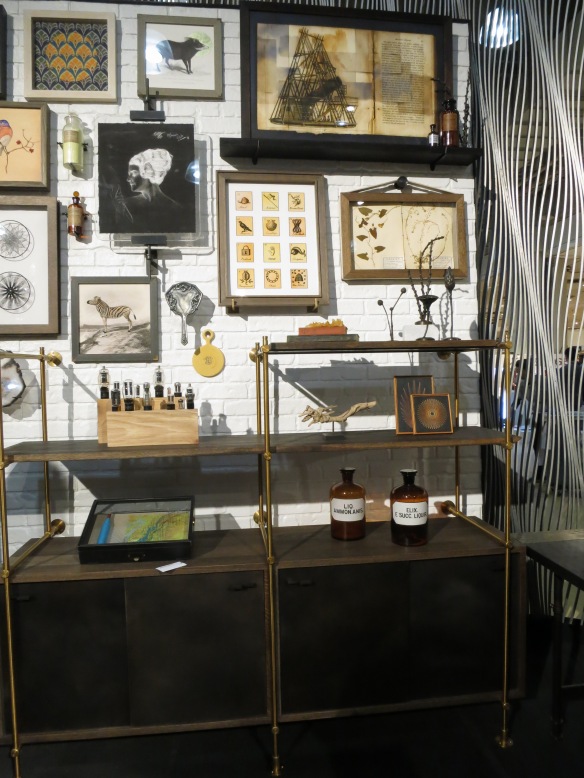 The shelves and vitrines were tagged with prices for each configuration.  I found them to be quite reasonable for what is custom-made artisan furniture made of real brass and wood in their Philadelphia shop.

There was one other display which knocked me over with delight, and that was the similarly-styled (black and brass) exhibit of Apparatus Studio.  On offer was a wonderful collection of lighting which just floored me with its beauty and obvious quality.  My pictures do not do this product justice.

Here is a detail of the Cloud chandelier. 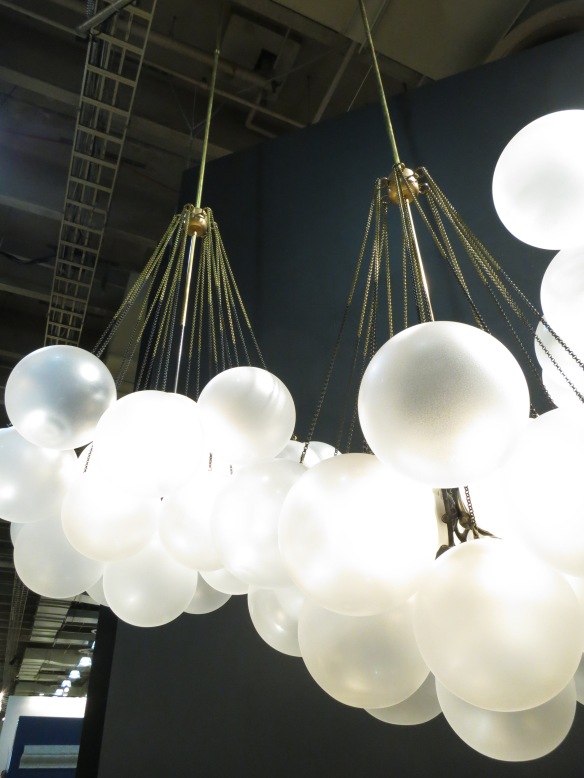 Also from their site, a really good illustration of Cloud.  It should also be noted that they have a gorgeous website too – check them out at http://www.apparatusstudio.com

I should also mention that I bought another Tyvek Mighty Wallet by the maker of Dynomighty himself, who always sets up a table in the Design Boom section of the show.  When I go to pay for things, every shop owner always compliments me on my wallet so I had to get another, again.

Later that night I wandered around Soho and checked out the parties and openings.  I looked at the new kitchen showrooms and looked around for some lighting as well.  I missed the opening reception but I made it a point to try and check out the E.R. Butler shop in Nolita, which was featuring some amazing lighting by designer Bec Brittain.  Here are some pics of the window displays. 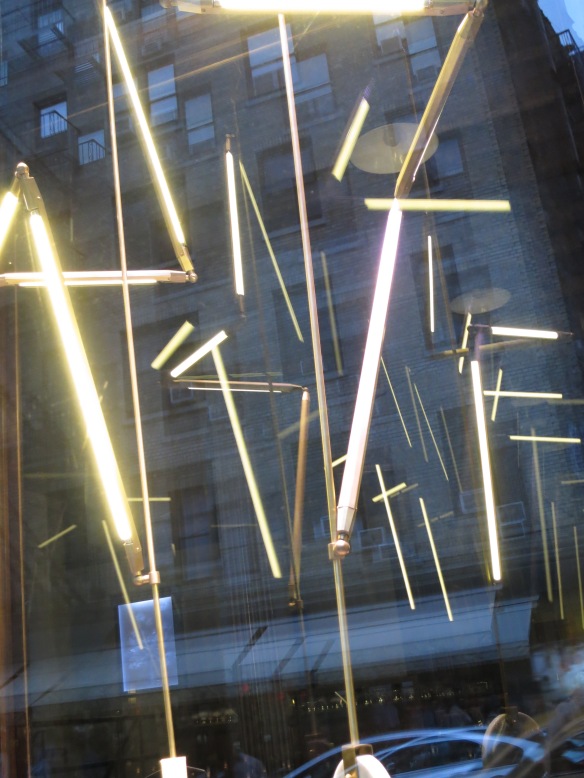 Made of brass, wood, LED strip lamps, marble… these were exquisite.

I didn’t know E.R. Butler commissioned this type of work.  If not familiar with this company, seek them out online, they produce an incredible collection of architectural hardware, such as reproduction and original door knobs and other assorted pulls and knobs.  I really wanted to see this small storefront as this shop is invitation only.  Well, maybe next year.  From Bec Brittain’s website, one more incredible design. 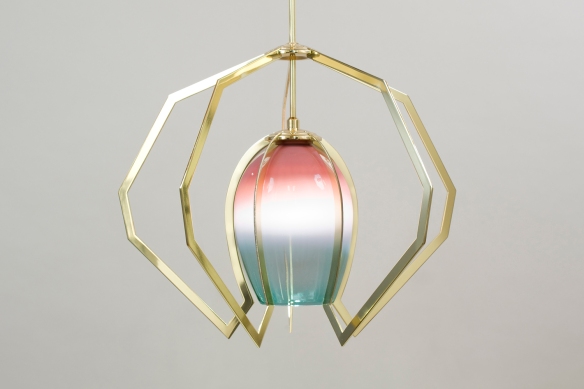 The last thing I did before leaving the city was take a walk through the amazing Grand Central Terminal, which is 100 years old this year.  I thought there would be special exhibits and maybe a gallery of construction photos or some other display… but alas there was nothing.  Well the building itself is of course wonderful, so I close with this interior shot.  I wish this great building well as it enters its second century.

I’ll be up in NYC more this summer as my interiors project begins construction.  More on that later, as we enter the demolition phase soon.

Past News and Features